Denley Hydraulics was presented the challenge of producing a test rig capable of delivering from 15 to 150 litres of oil per minute at a pressure of up to 250 bar. Not only this but it had to supply the oil at 120°C (248°F). Due to the low viscosity a checkball pump and variable speed drive (VSD) were selected. Many of the components were specials as the combination of flow, pressure and temperature made choice limited.

The Hydraulic test rig was comprised of two parts. A hydraulic power unit with a 37 kW motor, heaters and a cooling/filtration circuit, and a test chamber with digital readouts and also connections for client specified test equipment. This was done so that the operator was not subject to excessive noise. The test chamber was also fitted with oil mist extraction for optimal visibility. The sump of the test chamber was fitted with level control to automatically cut in/out when required.

Our client required a test rig that would submerge a valve in oil and safely test for leaks before moving onto hydraulic testing at high pressure. The solution Denley Hydraulics came to was to have a platform which raised and lowered a platform into oil. The Lid of the assembly was part of the platform and would automatically close as the platform was lowered with a two handed operation.

The lower section of the unit contained the hydraulic power unit (HPU) for raising and lowering the platform using a hydraulic cylinder. There was also a separate circuit used for cleaning and circulating the oil. Once submerged, the valve on test could be supplied with either low pressure air (regulated in the rig) or nitrogen at 24 bar.

Denley Hydraulic fabricated transfer trays so that valves could be transferred easily between assembly, leak testing, and functional testing. Gaskets between the trays helped to avoid oil spillage. 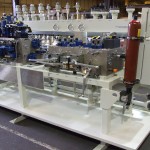 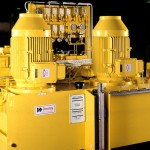