The Modern Hydraulic systems are a critical component of our daily lives.

At Denley Hydraulics, we are pleased to be able to offer a number of unique options based around the needs of the customer. Let us take a look at why Hydraulic systems are so important and a handful of their applications.

Thanks to the use of a fluid such as oil between a barrel, a rod and a piston, cylinders are able to produce an immense amount of linear power with the flip of a switch. The force created by  Hydraulic systems is strong enough to power industrial equipment, the mechanisms within an aeroplane and the brakes used by a high-capacity lorry.

At Denley’s we manufacture a standard cylinder range to Cetop 58H recommendations. Available in cushioned and non-cushioned form (single and through rod), all our cylinders are fully tested in accordance with ISO9001 and components are held in stock, allowing quick turnaround and delivery.

Our range covers bore sizes from 25mm to 160mm and strokes up to 6000mm, with various mounting styles available, whether it is front flange, rear flange, foot, trunnion, plain or spherical clevis.

Seals are available to suit all fluids, whether it is mineral oils, phosphate esters, water glycol, oil in water emulsions 95/5, or water in oil emulsion 60/40.

Benefits and Flexibility of hydraulic systems 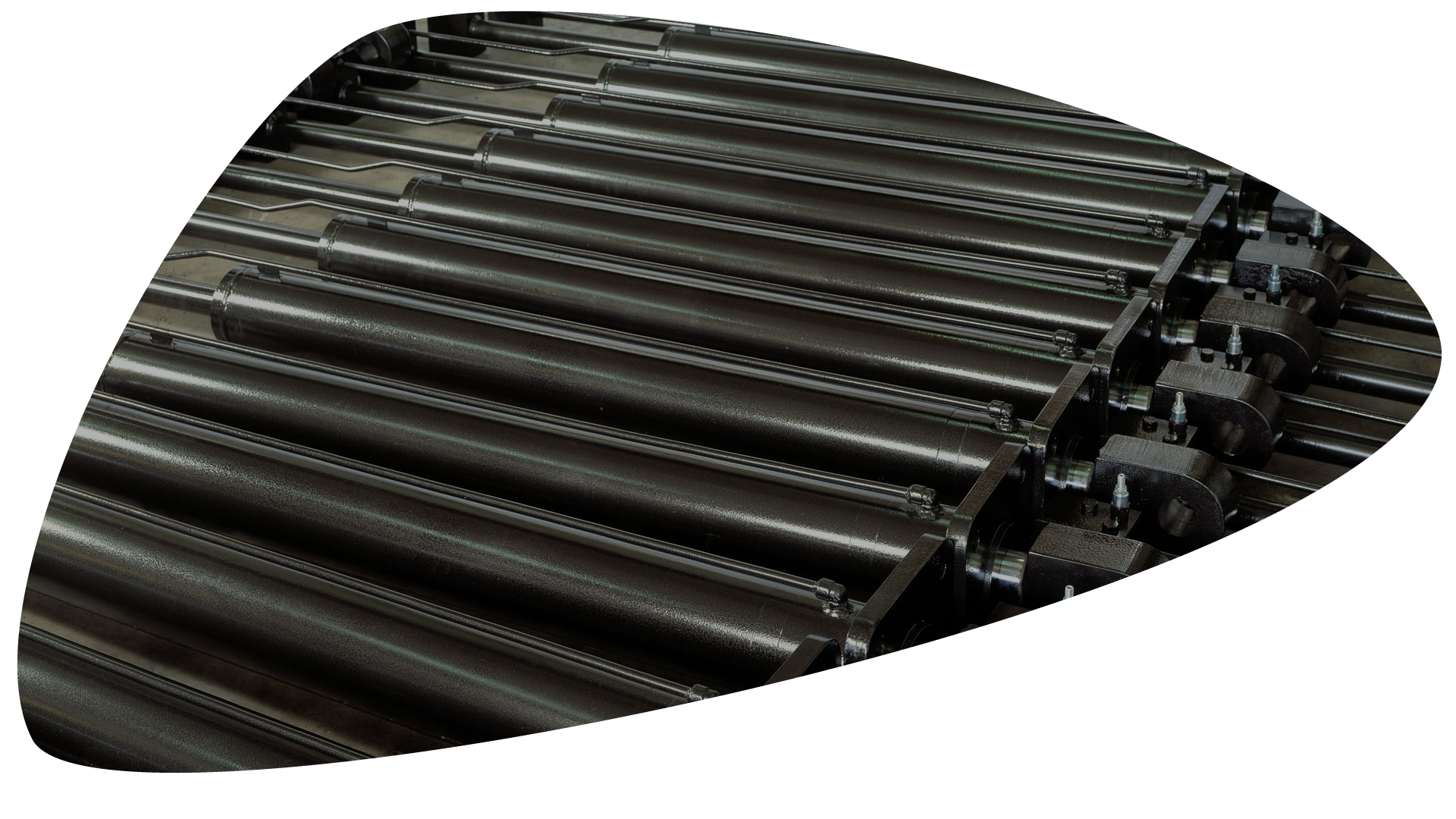 How do hydraulic systems work – What is a hydraulic cylinder?

A hydraulic cylinder is a mechanical actuator that is used to give a unidirectional force through a unidirectional stroke. It has many applications, notably in construction equipment (engineering vehicles), manufacturing machinery, and civil engineering.

Hydraulic cylinders get their power from pressurised hydraulic fluid, which is typically oil. The hydraulic system cylinder consists of:

A hydraulic system cylinder is the actuator or “motor” side of this system.

The hydraulic pump acts as the generator which delivers a fixed or regulated flow of oil to the hydraulic cylinder which then drives the piston.

The piston pushes the oil in the other chamber back to the reservoir. If we assume that the oil enters from cap end, during extension stroke, and the oil pressure in the rod end / head end is approximately zero, the force F on the piston rod equals the pressure P in the cylinder times the piston area A:

Hydraulic systems Cylinder base or cap

The main function of the cap is to enclose the pressure chamber at one end. The cap is connected to the body by means of welding, threading, bolts, or tie rod. Caps also perform as cylinder mounting components [cap flange, cap trunnion, cap clevis]. Cap size is determined based on the bending stress. A static seal / o-ring is used in between cap and barrel (except welded construction).

The main function of the head is to enclose the pressure chamber from the other end. The head contains an integrated rod sealing arrangement or the option to accept a seal gland. The head is connected to the body by means of threading, bolts, or tie rod. A static seal / o-ring is used in between head and barrel.

The main function of the piston is to separate the pressure zones inside the barrel. The piston is machined with grooves to fit elastomeric or metal seals and bearing elements. These seals can be single acting or double acting. The difference in pressure between the two sides of the piston causes the cylinder to extend and retract. The piston is attached with the piston rod by means of threads, bolts, or nuts to transfer the linear motion.

The piston rod is typically a hard chrome-plated piece of cold-rolled steel which attaches to the piston and extends from the cylinder through the rod-end head. In double rod-end cylinders, the actuator has a rod extending from both sides of the piston and out both ends of the barrel. The piston rod connects the hydraulic actuator to the machine component doing the work. This connection can be in the form of a machine thread or a mounting attachment. The piston rod is highly ground and polished so as to provide a reliable seal and prevent leakage.

The cylinder head is fitted with seals to prevent the pressurized oil from leaking past the interface between the rod and the head. This area is called the seal gland. The advantage of a seal gland is easy removal and seal replacement. The seal gland contains a primary seal, a secondary seal / buffer seal, bearing elements, wiper / scraper and static seal. In some cases, especially in small hydraulic cylinders, the rod gland and the bearing elements are made from a single integral machined part.

The seals are considered / designed as per the cylinder working pressure, cylinder speed, operating temperature, working medium and application. Piston seals are dynamic seals, and they can be single acting or double acting. Generally speaking, Elastomer seals made from nitrile rubber, Polyurethane or other materials are best in lower temperature environments, while seals made of Fluorocarbon Viton are better for higher temperatures. Metallic seals are also available and commonly use cast iron for the seal material. Rod seals are dynamic seals and generally are single acting. The compounds of rod seals are nitrile rubber, Polyurethane, or Fluorocarbon Viton. Wipers / scrapers are used to eliminate contaminants such as moisture, dirt, and dust, which can cause extensive damage to cylinder walls, rods, seals and other components. The common compound for wipers is polyurethane. Metallic scrapers are used for sub zero temperature applications, and applications where foreign materials can deposit on the rod. The bearing elements / wear bands are used to eliminate metal to metal contact. The wear bands are designed as per the side load requirements. The primary compounds used for wear bands are filled PTFE, woven fabric reinforced polyester resin and bronze

Other parts of hydraulic systems cylinders

There are many component parts that make up the internal portion of a hydraulic cylinder. All of these pieces combine to create a fully functioning component.[3]

The Benefits and Uses of Hydraulic Systems UK

Hydraulic systems UK: Their Primary Uses and Incredible Benefits  Without Hydraulic systems and cylinders, many commercial and industrial industries would not exist as they do today. The basic principle behind a Hydraulic system Cylinder is simple. Fluid (typically oil) is stored within the cylinder barrel. A piston is permanently mounted within this barrel although it is able to move in a linear direction. When force is placed upon the fluid within the unit, the piston will extend or retract. One of the main benefits of our Hydraulic system Cylinder Designs is that incredible amounts of pressure can be released. This arises from the fact that hydraulic force is a product of the pressure within the unit and the area of the piston.

The Many Applications of Hydraulic systems UK Manufactured

Whether or not we realise it, hydraulics normally encountered in our everyday lives. One clear example is the lorry used to collect rubbish. The refuse within the back of the unit is compressed with the use of these mechanisms. Hydraulic Cylinder Manufacturers such as Denley Hydraulics can also construct units that are intended to be used within the construction sector (such as when mounted within excavators). Recycling plants will use a Hydraulic Cylinder to compress scrap metal and other materials before they are melted down or otherwise modified. As you may already be aware, hydraulics within a plane are pivotal to control such mechanisms as landing gear and flaps. Of course, Hydraulic Cylinder Suppliers such as ourselves will design these units based around their intended applications as well as the industries in which they are to be used. These components can also be seen in other sectors such as:

So, it is clear to see that the modern world would suffer if it were not for the presence of these unique devices.

The Benefits of Hydraulic systems and cylinders UK

There is no doubt that the main benefit of modern Hydraulic Cylinder Design revolves around the ability to exert massive levels of force (usually measured in pounds per square inch or PSI) upon an object or within a mechanical device. This principle makes it possible for machines to accomplish seemingly herculean tasks with ease. Without modern hydraulics, vital actions such as the emergency braking of a lorry or boring into the side of a mountain would be all but impossible.

However, another interesting feature of the clever devices that we offer involves their versatility. Efficient Standard Cylinders can be designed with very discrete dimensions in mind. In the same respect, they are able to be mounted in a number of positions; all dependent upon the needs of the client in question. Different types of internal fluids such as mineral oil and water glycol are possible. This will once again revolve around the intended application of the cylinder.

Finally, reputable Hydraulic Cylinder Suppliers are known for the levels of safety that they adhere to. Whether referring to standard units or Bespoke Cylinders intended to meet highly precise engineering requirements, our units are highly reliable. Specialised metallic blends will guarantee less wear and tear on the structure. Emergency release valves can ensure that pressure levels do not exceed nominal limits. As there are few moving parts, the chances of operator injury are dramatically reduced.

This is only a brief description of why the Hydraulic Cylinder UK manufacturers at Denley Hydraulics are so important in these modern times. If you would like to learn more about the range of products that we offer, please do not hesitate to contact a representative at your convenience. We are happy to address any additional questions.